History In The Making with League Of Legends 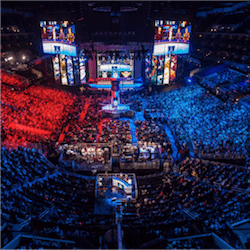 It’s not only the main event aspired to by every professional eSport team in existence, but it comes with the promise of a fat pay cheque too – with Riot Games having forked out a total of $5.07 (US) dollars for last year’s event.  This year’s figures have not been released but those in the know predict that it will more grandiose than last year.

Big Winnings For A Popular Event

Riot reported 43 million viewers having followed last year’s League of Legends World Championships – with Samsung Galaxy and SKTelecom T1 having been the event’s main title sponsors.  This year has reportedly seen the likes of Mercedes, L’Oreal and Intel bidding for title sponsorship.

Australia’s LG Dire Wolves secured their spot in this year’s event after having shown themselves worthy of becoming Champions of the Oceanic Pro League earlier this year – having beaten the Chiefs Esports Club to a 3-1 victory.

The LG Dire Wolves will have to really step up to the plate if they are to keep the dream alive – North American heavyweights Cloud 9 will be competing alongside Team oNe eSports from Brazil in the Group B division.  Failure to beat their Group B opponents will ultimately mean that they will have to come back next year for another go at it.

Captain Mitchell “Destiny” Shaw seems positive at the team’s prospects, saying that they had come a long way since their first boot camp in South Korea earlier this year – as individuals as well as functioning together as a team.

For this, they deserve the support of their country.