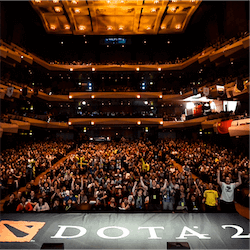 In a landmark move for Dota 2, TBS has announced it will be broadcasting Eleague: Road to the International Dota 2 Championships, officially kicking off on August 4th.  Professional gamers will be battling it out for a never before seen prize pool of 21 Million Dollars.  Games will be broadcast every Friday at 10 p.m. all throughout the month of August.

21 Million Dollars is the largest prize pool that eSports has ever seen.  The International Championships is an annual event that has been hosted by Valve since the very first event five years ago.  Back then the prize money was estimated at $1.6m, a small percentage of what it is today.

Tammy Tang was quoted as saying that the considerable prize pool changed everything for professional gamers – they were no longer viewed as merely being addicted to gaming, but instead had a goal and a motive to achieve.

A four-episode documentary will be preceding the Championships event, in an attempt to raise awareness regarding the world of eSports in general, as well as to offer valuable insight into what exactly goes into the preparation for an international eSports event.  The documentary is expected to clarify typical queries and questions that newcomers to the world of Dota 2 might have, with the complexities and mechanical workings of the game not always being obvious at first glance.

The 2017 Dota 2 International Championships will run from August 4th to August 12th – with 18 Dota 2 teams from around the world competing for a chunk of the prize money, largely generated by crowd funding.

Six of the teams who will be competing in this year’s Dota 2 Championships have been directly invited by Valve.  These include Team OG from Europe, Virtus Pro from the Commonwealth of Independent States, Evil Geniuses from North America, Team Liquid, also from Europe, Newbee from China and Invictus Gaming, also from China.

As far as the qualifying rounds went, The Philippines caused quite an uproar, with two Philippines-based teams competing at the same event for the first time in Dota 2 history.

The premium team competing for South East Asia will be Team TNC Pro – who has been somewhat of an international underdog since last year’s Dota 2 Championships.  Team Fnatic, also from South East Asia, is the wild-card in the SEA mix – historically achieving varying levels of success.