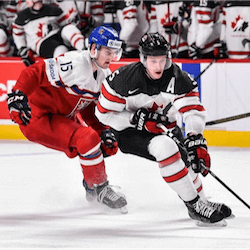 What started out as a thing to be perceived in the negative has turned out to be the best thing ever to happen to the 2018 World Junior Ice Hockey Championships.  We’re of course talking about the fact that the NHL has decided to withhold its players from competing in the 2018 Olympics in South Korea.

Canadian head coach Dominique Ducharme has his work cut out for him.  The sheer number of players at the Junior World Championships selection camp caused the ice to be torn up on parts of the playing surface after a single practice.

The good coach looked on as 33 of this best young charges went through the motions recently, all hoping to impress to the point of being included in the final squad of 22. Four goalies, 18 forwards and 10 defencemen put their best game forward for Ducharme, team lead Joel Bouchard, and head scout Brad McEwen.

Speaking frankly in the locker rooms after the time, Ducharme said that it was the job of the 33 hopefuls to make his decisions difficult, because they all had what it took to ultimately make the team.  It was now down to picking the very best from the country’s best.

Some Decisions May Prove Easier Than Others

Ducharme may have more difficulty with some of the decisions than with others.  Seven players have returned from last year’s silver medal stint.  They are Goaltender Carter Hart, defencemen Jake Bean, Kale Clague and Fabbro as well as forwards Dillon Dube, Michael McLeod and Taylor Raddysh.

Then there’s defenceman Victor Mete, who is currently on loan from the Montreal Canadiens.  He is also a rather safe bet, should safe bets be what Ducharme is looking for.

That leaves 14 open spots.  Be that as it may, the maths don’t seem to be working in quite this way for Ducharme.  He has made it very clear that all spots on the roster would have to be earned.