Head Coach Znarok Steps Down As From Position 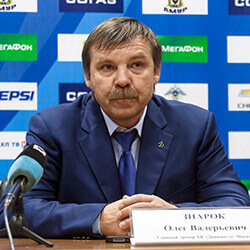 Russia’s national ice hockey team Head Coach, Oleg Znarok has stepped down temporarily after leading his team to gold in the Winter Olympic Games, as reported by the RIHF President Vladislav Tretiak.

In his place, Ilya Vorobyov will take up the reigns as temporary Head Coach, and will lead the team into the 2018 International Ice Hockey Federation games, which is set to played in Copenhagen, Denmark. Znarok intends to stay with the team during the games, but will be working within the capacity of a consultant.

In a statement to reporters, Tretiak has said, “Znarok has done a lot for us winning the Olympic Games and the World Championships. He is currently a bit tired as he had been under a heavy psychological strain both with SKA and the national team. This is why the RIHF decided to appoint Vorobyov as interim coach and Znarok will be the team’s consultant at this championship.”

Znarok took the lead as head coach of the Russian National Ice Hockey team after the Winter Olympics Games of 2014, which took place in Sochi. His main goal was to lead the game to gold in the 2018 Olympics, and after many years of hard training, this is exactly what the team, known as the ‘Red Machine’, did at the games in PyeongChang. He has also lead his team to gold in 2014, silver in 2015, and bronze in both 2016 and 2017 at the IIHF World Championships.