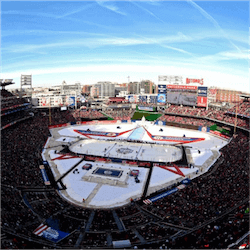 In the run up to the 2018 NHL Winter Classic, scheduled for New Year’s Day 2018 for the first time in New York City, we take a look at the history of what has become a highlight on the annual NHL calendar.  2018 will be the 10th anniversary of the NHL Winter Classic.  We take a look at what things were like back in 2008 when the idea of an outdoor hockey game seemed slightly preposterous and a lot like a birthday party for a 3-year old: but will anyone actually come?

NBC Reaping The Rewards Of Risking It All

Official NHL broadcaster NBC were getting ready to broadcast the very first outdoor game between the Sabres and the Pittsburgh Penguins at the Ralph Wilson Stadium and to put it mildly, there were no guarantees whatsoever.

It was the very first outdoor hockey game to be played in the United States and nobody actually knew what the reaction would be or, for that matter, what the weather would be like.  Soon, the snow began to fall in such a way that it created the magical effect of a snow-globe as backdrop to the game.  It wasn’t long for the haul before NBC realised that they were onto something, that the risky business and time and money invested would be paying off.  In a big way.

NBC executive producer Sam Flood remembers that first game as if it were yesterday.  He recalls the excitement of watching the very first goal being scored.  He remembers what it was like to see the very first replay from an aerial view and of course, the picture perfect finale to that very first game when rooky Sidney Crosby made that shootout goal that is still remembered by all who witnessed the match 10 years ago.

A Decade Of Creating Pure Heritage

New Year’s day 2018 will mark the 10th anniversary of Hockey League’s signature event, as that is exactly what it has become over the last 10 years: a key event on the annual calendar.  NBC analyst Mike Milbury speaks fondly of the event, saying that the League’s involvement is what makes the day so very special.  Everybody who is anyone in the world of hockey hopes to one day, just once, be a part of the Winter Classic.  It has become something to strive for and has become the highlight of many a player’s career.