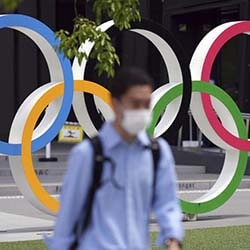 The Olympic Games plot thickened this week as a Japanese City cancelled a Kenyan pre-Tokyo training camp over a marked and sudden spike in infections, while describing the situation currently prevailing in the city as “critical”.

The city, Kurume, which is situated in the Fukuoka Prefecture, confirmed on Wednesday that they were cancelling the training, the Kenyan Olympic Committee has now confirmed. The committee furthermore revealed that the letter announced a rapid spread of recent new infections, staring around mid-April, as well as the fact that the country-wide rise in infections reported earlier on during the same month has not yet subsided.

The committee said that the letter had explained that the training facilities previously earmarked for Kenyan athletes were now being used as additional centres for vaccinations. The Kenyan team was supposed to spend a total of 12 days in the city, beginning July 7, for the purpose of acclimatising ahead of the July 23 opening of the Olympic Games in Tokyo, Japan.

Olympics Kenya acting secretary general Francis Mutuku has responded to the news by saying that the current situation the world now faces expects of people to be willing to adapt to change at any given moment, and that these decisions necessarily have to remain in the care and power of experts outside of the field of athletics and sport.

Mutuku said the team will now have no other option but to rely on alternative plans for preparing for the Games.

Several prominent Japanese newspapers are in the meantime continuing to put pressure on government to call off the Olympic Games in Tokyo.