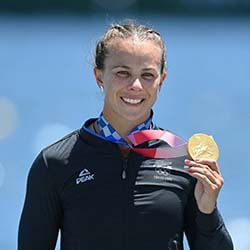 New Zealand’s most successful Olympian only makes winning medals at the Games look easy. Anyone paying attention will have noticed the smile mixed with a definite grimace as Lisa Carrington finished first in the canoe sprint women’s K1 500m final on Thursday – thereby securing her third gold medal in Tokyo.

The Kiwi after Thursday’s win at the Sea Forest Waterway elaborated some on what it takes to win a total of six Olympic Games medals – with five of those gold. Speaking to the press, the New Zealander described her approach to competing in the 500m event as one that required of her to give her all. While the event is a great deal more taxing on the body than most others, Carrington said her strategy necessarily had to remain the same.

The pro-Olympian at Thursday’s post-race media event spoke about how she had admired New Zealand’s Olympic greats as a child. Competing at Olympic level was where every aspiring young athlete wanted to be, said New Zealand’s most prolific Olympian.

But being a successful Olympic athlete and competing at the highest level for her country wasn’t something Carrington ever thought she could be and do. The Kiwi said on Thursday that she would not in her wildest dreams have been able to even imagine herself even qualifying for the Olympic Games – let alone win gold medals for her county.

The champion Kiwi won bronze in the same event in Rio, and initially described herself as being wary of including the taxing distance into her already over-extended programme of four races in Tokyo.