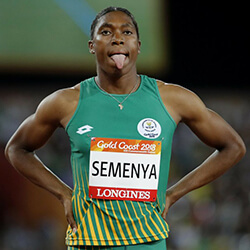 Olympic 800m winner Caster Semenya has been officially added to South Africa’s preliminary squad that will be heading to the World Championship in Qatar later in the year. Her participation long term in the squad is currently being determined by an appeal with the Switzerland Federal Supreme Court against a ruling from the International Association of Athletics Federations concerning testosterone levels in female runners, and whether there should be limit.

The SFT suspended the ruling from the IAAF, and allowed the double Olympic champion to compete without taking testosterone-reducing medication, but only on a temporary basis. The IAAF has stated that they will be seeking a reversal to the SFT’s decision.

The court’s super provisional order is only set to apply until the end of June, where by the IAAF are required to respond to the court on Semenya’s case. The World Championships will be taking place in Doha at the end of September and will run to the beginning of October. Last month, Semenya filed an official appeal after she failed to have her IAAF rules overturned by the Court of Arbitration for Sport.

The new riles specifically state that Semenya, along with athletes with differences of sexual development, will need to either take medication to take part in track events from 400m to a mile, or change to a different distance altogether. The three-time world champion won 5000, hold during the South African Athletics Championships with unchanged testosterone levels.