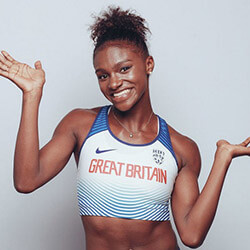 British Dina Asher-Smith has beaten world champion Dafne Schippers and Olympic champion Elaine Thompson to come first for the Diamond League 200m. European champion Asher-Smith, who is 23 years old, posted a world lead-time of 22.18 seconds, despite having to race in windy conditions in Stockholm. Scotland’s European indoor champion Laura Muir came claimed her own win for the 1500m, finishing the event in 4 minutes and 5.39 seconds.

Fellow Scottish athlete Eilish McColgan came in seventh place for the 5000m, just one day after he house was broken into. On her victory, Asher-Smith told reporters that she’s very happy, and that she wasn’t anticipating the time that she completed in especially, especially in the weather conditions and the time of year. She added that the World Championships are still a long way away, and while it’s good to be in good shape at the moment, it’s important that she remains in good shape and continue to progress, and hopes that she will run faster by September because everyone else will.

Muir, who was forced to settle for third place in the Westminster Mile behind Wales’ Melissa Courtney along with English Sarah McDonald, finished with a time of 61.77 seconds on the final lap to dominate the event. British Jemma Reekie, Sarah McDonald, and Amy Griffiths all finished in fourth, fifth, and eighth place respectively for the middle-distance event, which was not part of the Diamond League at the Olympic Stadium this year.