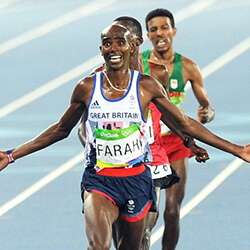 Scotland’s Twell, who is 29 years old, cross the finish line in 31 minutes and 55 seconds, just ahead of Verity Ockenden and Jess Piasecki. Talking about his win, Farah told reporters that he had honestly thought that it was only his sixth win, and that it was even better to hear that it was, in fact, his seventh.

European 5000, bronze winner Twell told reporters that she was nervous because of the depth in British women’s running, and that she loves running with the guys, and that running in an equal race is a good way of pushing yourself and your body. She continued by saying that it was an honour to become an Olympian, but that it’s not the finish line for her, and that she wants to give a good performance for the next Olympic Games, which are set to take place in Tokyo.

Daniel Sidbury, and three-time Paralympic medallist Shelly Woods have won their respective men’s and women’s wheelchair races for the Westminster Mile. Sidbury told reporters that he was surprised by pleased by the outcome of the race.