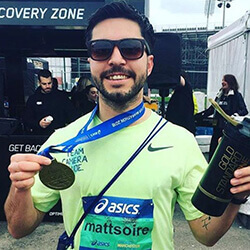 Matt Campbell, a well-known chef and London Marathon runner, collapsed about 36 kilometres into the event. It was the hottest Marathon on record, with temperatures reading 24.1 degrees Celsius at their hottest.

The 29 year old chef collapse was immediately reported, and although authorities were quick to the scene, it was already too late. Organisers said in a statement that they weren’t sure yet what caused Campbell’s death, but many attribute it to the high temperatures.

Chef Campbell was known for being on the United Kingdom’s Masterchef: The Professionals, and was known for his love of long distance runner. His previous runs at the distance running had seen success, including a person best time of 2 hours, 56 minutes, and 50 seconds at the Manchester Marathon.

Campbell had previously said that running helped him deal with the passing of his father in 2016. He’s been quoted as saying on Instagram, “Running has been amazing for me over the past 2 years, considering I only ran my first marathon 20 years ago, it’s helped me through grief, helped me de-stress, helped my process information after a long day and helped me menu plan!”

Organisers made sure to make extra water, showers, and ice available to runners along the 42 km track, but did run out of water at one point during the event.

Despite the heat, Kenyan Eliud Kipchoge set a new record, winning the marathon in just 2 hours, 4 minutes, and 27 seconds.