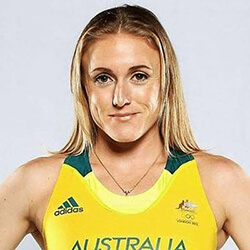 Two-time world champion Sally Pearson completed her first 100 hurdles in over 14 months as she made a return from injury for the Australian National Championships. The 32 year old won the heats in 12.99 seconds before she pulled out of the final due to fatigue.

Talking about her latest race, Pearson stated that after the race it felt like she was overheating, and that her legs felt like lead, adding that all she needed to do was get out of there. She continued by saying that she’s disappointed in herself, but that she’s going to start listening to her body from now on.

Pearson was forced to retire from the 2016 Olympics due to a torn hamstring, and also withdraw from last year’s Commonwealth Games that took place in her home country as she was suffering from an Achilles problem.

Despite this, the athlete is planning on going for a third world title while participating in Doha in October later this year.

Adding to her statement, she said that was her first hurdles race in 14 months, and that 14 months is a lot of rehab, and she’s hoping to get back into training against. Despite her attempts to start running again, she believes that she’s not quite ready, although she still has half a year before the start of the World Championships, giving her time to continue her rehabilitation and try to get back to the level she was before the injury.