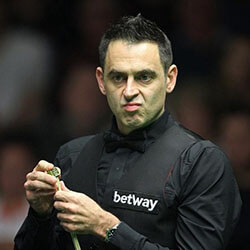 Six-time winner Ronnie O’Sullivan became the first player to reach the fourth round of the UK Championship after he beat China’s Zhou Yuelong 6-0.

O’Sullivan did not seem affected by the controversy that surrounded his threats to try and break away from and form his own Champions League-Style series of events, scoring breaks of more than 60. The 42-year-old scored 66, 60, and 68, eventually reaching a 4-0 mid-session lead. He ended the match with a stylish win of 89 and 69. O’Sullivan will now be facing Jack Lisowski or Marco Fu in the last 16.

O’Sullivan, who is also known as ‘The Rocket’ told reporters that he was happy with how he played, and did not care who he was facing in round four at the York Barbican.  He added that he felt for his opponent because is can be difficult, and that he is capable of wonderful things, and although he made a number of mistakes, his opponent didn’t take advantage of them. He finished off by saying that he is a good young player who can be dangerous.

World number 11 Kyren Wilson didn’t have much trouble reaching the last 16 for the first time after defeating Chinese Yan Bingtao 6-2.

Other players that have moved into the fourth round include Lu Ning of China, who beat world number 13 Luca Brecel, while Tom Ford from Leicester bested Alan McManus, the second round winner of three-time UKL championship John Higgins, 6-3.