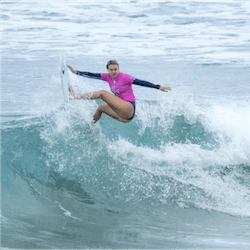 The international surfing body, the World Surf League (WSL) has announced that the top woman surfers will be joining their male equivalents Corona Open J-Bay in Jeffreys Bay, South Africa in July 2018.  The women’s tour in the country’s surf capital will run from 10 to 17 July, overlapping with that of their male counterparts, whose tour will run from 2 July to 13 July.

Craig Jarvis, spokesperson for the World Surf League, said that the decision was welcomed, especially by South Africa and that the hope was that this would encourage more South Africans to be a part of the world tour.

Jarvis went on to say that female surfers had literally taken the surfing world by storm and that the expectation was that they would fare incredibly well in the Carona.  The 2016 Corona Open J-Bay had drawn a great deal of worldwide attention to Jeffreys Bay and this has ultimately led to the event being expanded a lot.

It’s not only the female surfers who are set to benefit from the competition in Jeffreys Bay, but also the South African town’s economy, with visitors coming in from all over the globe to witness the world-class event and explore the local town.  Sophie Goldschmidt, World Surf League executive, confirmed that there is currently a lot of excitement around the upcoming event for women at the Supertubes and that the expectation is that the women surfers will bring a great deal to the South African event.

Proposed Changes To The 2018 Event

This year’s women’s championship drew to a close in Honolua Bay in Hawaii, on the 25 November. The championship has been very successful and the women have shown why they are considered to be world class competitors.

The World Surf League recently announced that a lot of changes have been made to the schedule for 2018, most notably probably the addition of Lemoore to both the men’s as well as the women’s championship schedule. Fiji has been excluded from the 2018 championship, much to everyone’s surprise.  Goldschmidt confirmed that with sufficient support from the Fiji government and tourist board, the WSL are hoping to re-introduce Fiji to the schedule in the future.

Trestles and Cascais have also been excluded from the 2018 tour, but these too, will most probably making a return to the annual surfing calendar should the right amount of support be present.

The 2018 WSL Women’s Championship Tour kicks off at the Roxy Pro Gold Coast in Australia on 11 March 2018.