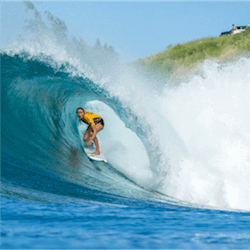 The word’s best in the world of women’s surfing have arrived in Hawaii and are ready to settle the score and contest the final event for the year and of the 2017 World Surf League Championship Tour.  This year’s title contenders are: Sally Fitzgibbons (Australia), Tyler Wright (Australia), Courtney Conlogue (USA), Carissa Moore (HAW) and Stephanie Gilmore (Australia).

The possible title scenarios are:

A Smashing Season For Fitzgibbons

Sally Fitzgibbons is no stranger to winning and has had a fantastic season of it so far.  She comes into the event as the leader on the score board after having performed well consistently throughout the season.  Fitzgibbons has made the final once before back in 2015 and needs to finish first in this year’s final in order to clinch the title.

Speaking to the press, Fitzgibbons said that she was feeling very confident with the Jeep leader jersey on her back and that whatever the outcome, it was a fantastic feeling to have elevated herself to this extent in a sport that she enjoys.

For Courtney Conlogue it’s truly been a case of always the bridesmaid, never the bride.  Conlogue finished runner-up in both the 2015 as well as the 2016 final events, and has more event wins under belt for the current season than any other surfer.

An event win in Hawaii will secure the title for Conlogue.  An obviously excited Conlogue was quoted as saying that it was a breath of fresh air that there were so many title contenders this year, and that this bode well for the sport in general.

She went on to say that it had been her dream to hold the trophy for the longest time and that this year; she would be doing everything in her power to make that a reality. If you think she is in with a  chance you can place your bets online at Luxbet on her, or any of the other contenders.