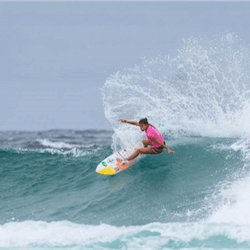 Florida-born US surfer Caroline Marks will make history next year, when she becomes the youngest competitor, male or female, to participate in a WSL Championship Tour. The California native, who hails originally from Boca Raton, has won already the national championship 17 times at the age of 15; she’ll only turn 16 on St Valentine’s Day next year.

Now a resident of San Clemente, California and a local at Melbourne Beach, Marks was recently announced as one of the rookies qualified for the 2018 WSL Women’s Championship, even though the 2017 Championship still has one all-important tournament left to decide this year’s champion: the Maui Women’s Pro starting at Honalua on 25 November.

Marks has been surfing for eight years, after being introduced to the sport by her older brothers. In the past six years, she has gathered trophies and medals galore, including winning two WSP Pro Junior titles at the US Open of Surfing in a row and nine National Scholastic Surfing Association championships. She is the first east coast-born surfer to qualify for the WSL Women’s Championship.

Online sports betting fans will still have their eyes on this year’s WSL Women’s Championship Tour, however. There are five surfers still in with a shot at clinching the title if they can win in Hawaii. Tournament favourite is Australian Sally Fitzgibbons, currently atop the ladder with 52.900 points.

Depending on how her rivals do, she could even fail in Maui and still win, but she won’t want to take that chance. She’s only made the final in Maui once before, in 2015, so even at odds of $2.00 to win the final round and the championship, she’s not a certainty.

There are two Australians who could challenge: defending champion Tyler Wright, lying second on 51.200 points, and fifth-placed Stephanie Gilmour, on 47.300. Wright is being offered at $2.50 to win in Maui, with Gilmour at $41.00.

Courtney Conlogue has a slim hope of upsetting Fitzgibbons’ applecart in Hawaii. The US surfer is currently third on 50.000, but she doesn’t have a great record in the Maui tournament, so she may be slightly overrated at $5.00.

Hawaii’s Carissa Moore, who has made the final in Maui for the past three years back-to-back, might be more capable of providing an upset, despite her $34.00 odds. She’s fourth on the ladder with 47.300.