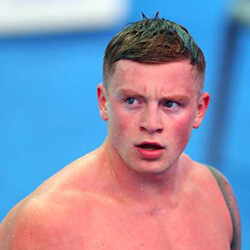 Peaty remains unbeaten in the last five years for distance in major competitions, with his semi final seeing him break his own world record and become the first man ever to swim the event in under 57 seconds. He aimed to beat his record breaking time, but stated that he was happy with his time of 57.14 seconds.

Talking about his victory, Peaty said that he had to be a better version of himself, but that he had made a small mistake for the first length after trying to force the speed too much. He added that he’s still learning his most important lessons, and that he was always trying to improve, which he believes will help him going into next year’s event.

The British athlete has set the 15 best times in 100, breaststroke, and became the first male swimmer to claim three world titles for the event. Peaty had previously shared his record of two 100m titles with American Brendan Hansen and Norbert Rozsa from Hungary, but his latest performance means that he has also become he the first man in history to win five championship medals for breaststroke events, saying that meditation was the key to his success.