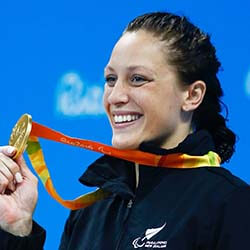 While happy as a clam in water (literally!) to be competing in the Tokyo Paralympics, New Zealand golden girl and champion swimmer Sophie Pascoe says it has been a gruelling and challenging run-up to the prestigious event.

With four Paralympic Games under her belt, Pascoe is no newcomer to the pressure associated with competing at the highest levels of her sport. Even so, having not lined up in a competitive event since April can be expected to take its toll on any athlete – no matter the level of experience.

Instead of preparing for the big event in her training base in Arizona, Pascoe has been training in Christchurch, which is her hometown. And the lack of elite-level training has not been made better in any way by the hospitalisation of long-time coach Roly Crichton.

But while Pascoe has battled through the challenges of a particularly difficult year, she describes being in Tokyo as a massive achievement in and of itself.

Coach Crichton, meanwhile, while unable to attend in person, has sent Pascoe on her way with a book of advice compiled especially for her in hand. Sticking to the rule book will ensure New Zealand’s most decorated Paralympian will continue to make her mark in the pages of history.