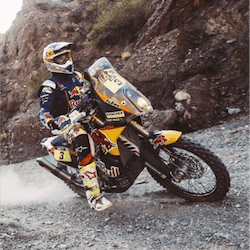 Australian enduro-motorcyclist Toby Price has made his way into the Top 4 of the 2018 Dakar Rally.  This after Price moved into 3rd place during a very successful Stage 8, the first marathon stage for this year’s event.  Price’s team-mate, Antoine Meo, fought hard to stave off the advances of Ricky Brabec (Honda), and went on to win the test.

Meo was at it full throttle right from the onset and ultimately gathered together big gains in the overall classification.  Brabec was put out by Meo and made to work really hard from start to finish.  Speaking to the press afterwards, Meo said that he had decided from the beginning that he would have to go full out right from the start, and that that was what he did, pushing the boundaries until the very last second.

Meo seemed happy with his overall result, considering that he had stopped to assist Pablo Quintanilla, whose chain had come undone as well as having fallen from his bike at the 400km mark.  Despite the challenges, Meo confirmed that both he and his bike were fine and in good order.

Price has now moved into fourth place overall, having been third fastest during the stage and managing to pull back 6 minutes on race leader Adrien Van Beveren.  After the time, Price said that it had not been an easy two days, with a combined distance of 920km over the span of the two days.

Price said that he was thankful for the unexpected rest day to have befallen the competitors due to the 9th stage having been cancelled as a result of rains.  He cautiously added that it had to be kept in mind that everyone else would be well rested too, and that Tuesday would see everyone ready and rearing to go with renewed vigour.

Price finished off by saying that the plan was to just keep on doing what he had been doing thus far, despite his knowing that the upcoming stages in Argentina were going to be tough and challenging.

Australia’s Rodney Faggotter made it into 26th place for the stage and 22nd place overall.  He joins Van Beveren as the only two riders left of the original Yamaha factory group.