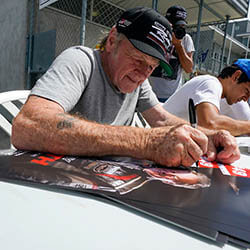 New Zealand motor racing veteran Kenny Smith will in January line up to race his 50th NZ Grand Prix – at the age of 79.

Smith is the first confirmed entry into the 66th running of the New Zealand Grand Prix. He is a three-time winner of the world-famous race and remains adamant that he’s in the race to win the race – and not merely for the “numbers”. Even so, said Smith of the huge upcoming milestone, people do relate to the numbers, making of his half-century start an exciting prospect.

2021 will be the 63rd consecutive motor racing season actively participated in for Smith, who says he absolutely loves motor racing and would want to continue for as long as possible. The fact that he now heads his 63rd year is the result of his love and passion for the sport, he explained.

Smith will in January race one of the Castrol Toyota Racing Series’ FT60 cars, which is a new-generation car. He says that although he’s realistic about his chances against a younger field of drivers, he believes that he hasn’t yet lost his edge or his capacity for handling speed. He even added that if Formula 5000 cars were to be allowed in Grand Prix racing, he could surely win the race – even while competing against younger generations.

The event will span January 22 – 24 and will for the first time in the history of the Grand Prix be held at North Waikato’s Hampton Downs circuit.