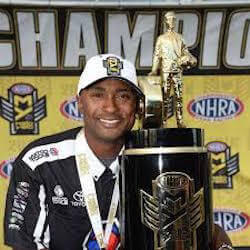 Antron Brown To Set The Pace At Pennzoil 400

Three-time Top Fuel World Champion Antron Brown will be driving the official pace car at this year’s inaugural Pennzoil 400. The Pennzoil 400 will take place at the Las Vegas Motor Speedway on Sunday the 4th of March and Brown, no stranger to dizzying speeds himself, will be piloting the field in a 2018 Toyota Camry Pace Car.

Brown is a regular competitor in the NHRA Mello Yello Drag Racing Series and has accumulated a total of  65 victories as well as 49 No. 1 qualifiers. Brown has won three Top Fuel world titles since 2012, and is regularly seen doing speeds in excess of 330mph in his signature Matco Tools / US Army / Toyota Top Fuel dragster.

Brown reports being super psyched at the prospect of being a pace car driver for the very first time.

Fans heading for the Pennzoil 400 and the Las Vegas Motor Speedway will have a much easier time of it going forward than in the past, according to race organisers. Last year, the construction of a new 5-mile stretch of interstate caused heavy traffic congestion en route to the motorway, much to the frustration of fans.

Chris Powell, president of the Las Vegas Motor Speedway has confirmed that the upgrade to the interstate will be complete by the weekend of 2-4 March, right in time for the Pennzoil 400. More than 100,000 fans are expected at the venue on the weekend. The action kicks off with the Stratosphere Qualifying and the Stratosphere 200 NASCAR Camping World Truck Series and culminates with the Pennzoil 400 on Sunday, March 4th.

Fans will also have alternative forms of transport at their disposal this year, with the speedway having recently partnered up with the ride-sharing service Lyft in order to further smooth things over for fans attending events at the speedway.

Dedicated pick-off and drop-off points will be allocated outside of two of the main gates. Lyft Las Vegas general manager Yacob Girma confirmed the news, saying that motor-racing did not get much bigger than NASCAR and that the team at Lyft was excited at the prospect of becoming a key service provider at NASCAR events.

Powell  said that it would be interesting to see how fans responded to the ride-sharing concept as it was still a relatively new idea. He added that he felt confident that the future of safe, affordable and reliable transportation was now and that ride-sharing was the answer.