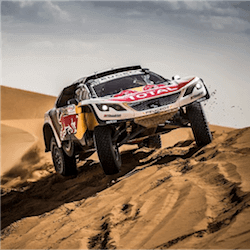 South America is a land of hostile terrain.  It’s the unknown and the treacherous personified.  It’s also the location for the 2018 Dakar Rally.  The route has been announced and competitors now have until January 6th to study the maps spanning over 9,000km of sand dunes, high altitude racing and potentially confusing conditions.

13-time Dakar winner Stephane Peterhansel (Team Peugeot Total) clearly knows what he’s talking about when he says that the high altitude racing in Bolivia is the key to the Dakar and to winning the Dakar.

The extreme altitude is notorious for causing illness and extreme lapses in concentration.  The weather in Bolivia isn’t anyone’s playmate either, with conditions known to change the entire landscape in the blink of an eye.

For those who make it over the tricky dunes of Peru and the potential confusion of Bolivia, its onwards toward the relentless and unforgiving heat of Argentina.

Former Dakar winner and Aussie Toby Price has hit the nail on the head.  According to Price, even though the route is pre-announced and to some even familiar as a second or third go, you still simply never know what it will be like.  This is the nature of Dakar.  You never know what it may throw at you next.  Price races for the Red Bull KTM Factory Team.

This year will be the 40th anniversary of the Dakar Rally.

French President Emmanuel Macron has expressed his support for the Lebanese national racing team as they prepare for the 2018 Dakar Rally.  This year it will be up to drivers Jad Qomeir and Antoine Eskandar to hold the name of Lebanon high.

A photo of Macron holding Lebanon’s Dakar Rally logo has been doing the rounds on social media, together with a caption by the Lebanese duo, thanking the president for his support.  The pair will be driving a Buggy BV6 and it will be the first time that a team from Lebanon will be attempting the Dakar.

The pair have been actively training in preparation for the Dakar for the past six months in Merzouga, a town situated in the Sahara Desert.  Due to the wide-spread media coverage that they have attracted, they have also decided to utilise this as an opportunity to promote a humanitarian cause that they hold close to their hearts, in support of people with disabilities.

Not just good looking and tenacious then, but also good natured.