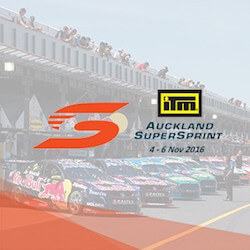 Kiwi daredevil and freestyle motocross rider Levi Sherwood will be headlining the entertainment and wowing fans with his stunts at the ITM SuperSprint on November 3rd to November 5th at Pukekohe.  Saturday and Sunday make up the penultimate stop in the Virgin Australia Supercars Championship at Pukekohe Park Raceway.

The Red Bull rider said that he was excited to be putting freestyle motocross on display at New Zealand’s biggest annual weekend in motorsport.

For Shell V-Power Racing’s Fabian Coulthard it has been a stunt of another nature keeping him up at night out of sheer excitement.  Coulthard and his partner Becky Lamb welcomed their new-born twins Mackenzie and Carter into the world last Monday.  Despite the life-changing event, Coulthard said that his mind was still thinking racing all the way.

Fabian Coulthard is currently just 17 points adrift behind Jamie Whincup and has said that he is focused and ready for the home event in New Zealand.  Speaking to the press Coulthard also said that the newest arrivals in the Coulthard clan has not affected his preparations for the ITM Auckland SuperSprint New Zealand event in any way.  He said that despite the arrival of the two brand new people in his life, he still had a job to do and that his mind was most certainly still thinking racing all the way.

Coulthard’s team mate Scott McLaughlin is currently just a further 10 points behind.  This means that the top 3 in the championship are all separated by a nail-biting 27 points and two events remaining.  Coulthard said that he wasn’t exactly bothered by losing to Jamie Whincup in the Gold Coast race and that whether he went to New Zealand ranked 1st or ranked 2nd made no difference to him whatsoever.  He said that he simply wanted to perform well at every event and that that was what he had been doing and would be aiming to do in future.

Referring to DJR Team Penske Falcons’ podium reach at Pukekohe in 2016, Coulthard said that this year should be no different from the good that achieved last year.  He went on to say that 2017 had brought many improvements along with it, as the team had been performing well on tracks where their performance had been less than ideal in the past.

According to Coulthard, Pukekohe would this year witness one of the most competitive packages by the team yet.