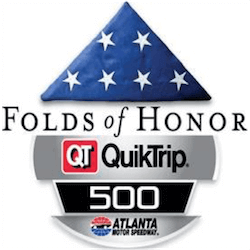 The Folds of Honour Quiktrip 500 is a NASCAR Cup stock car race held in Atlanta Georgia at the Atlanta Motor Speedway.  This event is the second race of the Monster Energy NASCAR Cup. Originally this race was part of the second race of the season. Up until 2001 this event was held in November but it has been moved down in the calendar, and rightly so as this event, with the involvement of the Folds of Honour charity is one of the most exciting races of the year.

Folds of Honour is a very worthy charitable organisation that specialises in military families, specifically military families that have lost one or more military men or woman and who now need additional support. The name comes from the folds in the American flag given to the family of fallen soldiers. This charity adds extra poignancy to the Quiktrip 500.

That said you don’t have to be the world’s biggest US patriot to enjoy the fast paced, hard driving action of this event. Set over 325 miles, with over 200 laps and some of the best drivers in the world, what is not to love? Richard Petty, Dale Earnhardt, Bobby Labonte and Jimmie Johnson are just some of the names that have raced at this event and made a huge name for themselves.

Last year was a real nail biter for racing fans as it was quite an upset. Kevin Harvick led the 2017 Quiktrip pack for 292 of the race’s 325 laps, making him the clear favourite to take home the gold. Suddenly Austin Dillon’s car stalled on the track and the judges sent out a caution on the pit road.

Due to lack of concentration or perhaps impatience or even wilful ignorance, Harvick was caught speeding in his exit and was relegated to the back of the race pack. With only seven more laps to go it seemed that number 2, Kyle Larson was the shoe in to grab the gold, until Brad Keselowski came from behind and took the pole position.

2017 was the first time that a staged race approach was used where the entire event is split into two 85 lap races with a final 3rd stage being made up of 155 laps. There have been talks of repaving the legendary track which last saw a new lick of paint in 1997, but interestingly both fans and drivers have rallied against this, despite clear indications that the paving his causing driver’s tyres to fail.