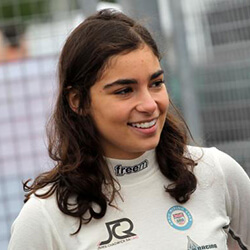 British driver Jamie Chadwick has won for the second time in three races for the all-female W Series, and has extended her lead at the top of the roster for the championship. 21-year-old Chadwick won in Misano, Italy, and currently holds a 13-point lead over her closest rival, Dutch driver Beitske Visser at the halfway point of the series’ debut.

Visser came in second place with Liechtenstein’s Fabienne Wohlwend, who had ended the race in third place after starting on pole. Chadwick, talking to reporters, stated that she didn’t want to make any mistakes, and that it had felt like a long race for her. She added that in previous races, she had always made one or two mistakes, so she was just trying to be disciplined and make any mistakes.

Fellow English driver Alice Powell crashed out of the race due to a broken suspension and wheel after she collided with Wohlwent, had had had a slow start. The incident forced them to bring out the safety car, but after the race had resumed, Chadwick pulled away with Wohlwend and Visser close behind for most of the event. Other Britons, Esmee Hawkey, Sarah Moore, and Jessica Hawkins finished in 11th, 9th and 15th place respectively. The six races series, which makes use of identical Formula Three cars for all of the drivers, was designed to help women move up the motorsport ladder, and the winner of the series will receive $500,000.