Pennzoil 400 And A Super Speedway 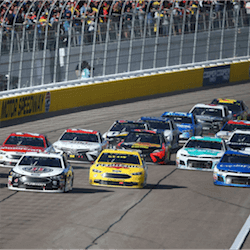 Las Vegas may be best known for being the casino entertainment capital of the world, but it is also home to the Las Vegas Motor Speedway, which is in turn, home to NASCAR’s Pennzoil 400. We delve deeper into the history and intricate sub-culture of one of the most famous superspeedways in the world.

Construction of the Las Vegas Motor Speedway began in 1995 and the very first NASCAR race to have been held at the speedway was the NASCAR K&N Pro Series West race, on November 2nd, 1996. The inaugural Monster Energy NASCAR Cup Series was held on March 1st, 1998, that year won by Mark Martin.

The Las Vegas Motor Speedway is situated in Clark County in Nevada (Las Vegas). The speedway consists of a 1,200 acre complex that comprises of multiple high-speed tracks for the sport of motor racing.

NASCAR’S timing and scoring makes use of a distance of 2.4km, a distance that was also used by Indycar between the years 1996 and 2000. Until today, NASCAR still uses the same distance for the reconfigured oval track.

The track has also been the home of various other events. In December of 2013, the RE/MAX World Long Drive Championship was held at the speedway, and was won by Tim Burke. Interestingly enough, the track also featured as the finish line for the 24th season of The Amazing Race in 2014.

On The Map For The Wrong Reasons

The track also made news in 2011 when one of the most horrific crashes ever to have taken place in the world of motorsports, took place there. The incident happened during the final race of the 2011 IndyCar season and involved a 15-car pile-up, some of which burst into flames. IndyCar legend Dan Wheldon sadly passed away in the crash.