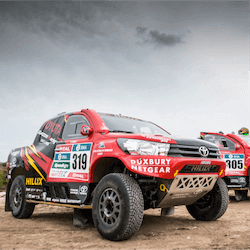 South African Airways Cargo is proudly serving as the air freight partner of the Toyota Gazoo Racing South Africa Team for this year’s Dakar Rally, set to take place from January 6th to January 20th in Argentina, Bolivia, and Peru. This race is frequently billed as one of the most difficult event in motorsport in the world, and is viewed as a test of the vehicle’s durability and the ability of the team to endure.

The Continuation of a Long Partnership

This partnership has been in force since back in 2012, and it involves the racing vehicles being transported through to Sao Paulo in Brazil, en route to Lima, in Peru, for the race’s start. The shipment will be made up of three vehicles and their spare parts, with a total weight of almost 8 000 kilograms.

It will take around 16 hours for the shipment to reach the destination, with 11 of these spent on the aircraft.

Tleli Makhetha, the General Manager for SAA Cargo, states that the partnership’s continuation remains vital to the national carrier, as it provides it with the chance to showcase its operational capability on the world’s stage. He added that about two months were needed for preparation before the transportation took place in order to ensure that no hassles arose, and that the airline’s priority was its client’s needs, since without them no business could take place. He finished off by saying that the whole process was only possible thanks to a lot of hard work and a thorough effort from the entire team.

Race Vehicle Development a Critical Part of the Process

Glyn Hall, the Toyota Gazoo Racing South African Team Principal, said that race vehicle development was critical in motor racing. He added that this development was a time-consuming process, and that their SAA Cargo partnership allowed them to forego relying on sea freight in order to get the cars over to South America, allowing for a significant advantage in terms of development strategy.

Details for the Race

This will be the 40th edition of the Dakar Rally, and it is set to begin in Lima, proceed through to La Paz, and end in Argentina. It extends over 15 days, and is made up of 14 racing stages. The 450 trucks, quads, cars, and motorcycles will be covering around 9 500 kilometers, and 5 000 of these will be against the clock.