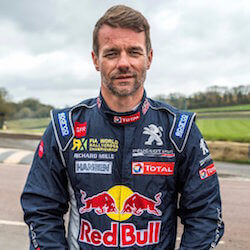 Peugeot’s Sebastian Loeb has announced his retirement from the 2018 Dakar Rally.  Loeb was forced to a halt a mere three miles into the 165-mile timed test stage between San Juan de Marcona and Arequipa on Day 5 of the Dakar, after having landed up in a sinkhole.  A sweeper truck was on the scene soon and managed to pull the vehicle from the loose sand, but Loeb’s co-driver, Daniel Elena, had sustained an injury when the car crashed into the sinkhole, leaving the pair incapacitated to continue with the stage.

This comes as an especially disappointing event for Loeb, who had recorded his 10th Dakar stage win just the day before, on Tuesday.

With Loeb having been ruled out, Peugeot team-mates Peterhansel and Sainz moved into the first position in the car class.  Peterhansel managed to inject a sturdy shot of adrenaline into his overall chances by racking up a strong time during Wednesday’s stage.  He ended up making his first stage win of the 2018 event, finishing up all of 5 minutes ahead of his nearest rival, Bernhard ten Brinke of Toyota.

Carlos Sainz had a worse run of it, having gotten stuck in the dunes along the way.  He now trails Peterhansel by more than 30 minutes in the general classification standings.

Route Too Much, According to Sainz

Carlos Sainz has said that the 2018 route of the Dakar Rally is too much, especially for amateur drivers.  This after a host of early retirements from the event on Tuesday and Wednesday.  Sainz said that the complicated dunes, soft, uneven and broken, were the challenges facing competitors.  He said that the start was too hard and that he expected many more drivers and teams to retire over the next couple of stage days.  There have been a total of 43 retirements over the first three stage days of the event.

Even Toyota has been having a terrible time of it.  Toyota’s lead drivers Giniel de Villiers and Nasser Al-Attiya on Tuesday dropped all the way to an hour from the front of the pack.  Argentina’s Lucio Alvarez and South African navigation hand Rob Howie had slightly better luck, having made a very impressive come-back after having rolled their Toyota already on the second day of the event.

After Tuesday’s stage, the pair were in 20th place overall in the standings.