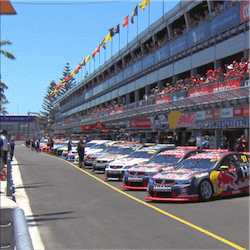 Sunday brings Kiwi punters the climax of the 2017 Supercars Championship at the Coates Hire Newcastle 500. The NSW circuit will host two 95-lap races totalling 250km each.

Replacing the Sydney 500 as the end of the championship tour, the Newcastle 500 makes its debut at this year’s Supercars, on a controversial new street circuit laid out over the objections of some East End residents.

Theoretically, with 300 points up for grabs, any one of the top five drivers on the ladder stands a chance at scooping the title in Newcastle. But Shane van Gisbergen in fifth, 276 points behind the leader on 2,574, reckons it’s too much of a long shot to bother about.

Instead, he’ll be focusing on supporting Triple Eight teammate Jamie Whincup, currently topping the table on 2,850, as he tries to stave off the challenge by Team Penske’s Scott McLaughlin, who starts in Newcastle on 2,820.

McLaughlin and Whincup are neck-and-neck in the online betting for Newcastle, with both offered at $3.50. McLaughlin’s teammate Fabian Coulthard, currently third with 2,674 points, is fifth in Newcastle the betting, at $10.00, but a very long shot at third favourite to win the championship outright, at $90.00 and up.

Although not fancied to miraculously win the championship, Rod Nash Racing’s Chaz Mostert, fourth on the ladder with 2,586, and Van Gisbergen haven’t been ruled out for consolation wins in Newcastle. They’re offered at $5.00 and $8.00 respectively.

While Coulthard, Van Gisbergen and Mostert could all challenge, most punters expect the McLaughlin-Whincup battle to dominate the weekend. Despite the level odds, appropriately named Whincup will be the favourite for many betting fans.

He’s acknowledged as the greatest driver Supercars has produced, with an unmatched six championships to his name. The 34-year-old Victorian is fired up to take his seventh title, and warned fans that wing mirrors and the paintwork on the doors are likely to be the first casualties at Newcastle.

McLaughlin has speed on his side, to counter Whincup’s experience. He’s taken seven wins in 24 races this season, compared to Whincup’s three, but that just highlights the six-time champion’s consistency in other races. The 24-year-old New Zealander, who finished third in last year’s championship, will need to pull out all the stops to haul in the ladder leader.