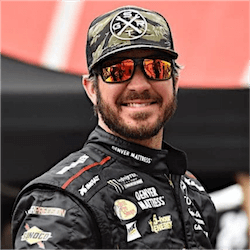 Martin Truex Jr made for a firm reminder on the weekend that he was the man to beat if anyone wanted to claim the Monster Energy NASCAR Cup Series this year.  Truex Jr is now in the lead by 34 points, with Kyle Larson in second place.  Kyle Busch, the initial favourite expected to have given Truex a run for his money, got off to a poor start by slamming into a wall half-way through the second stage.  His problems only escalated as the race continued and he eventually finished in 29th position, knocking his overall position on the leader board from 2nd place down to 6th place.

The 10-race championships playoff series now moves on to one of the most challenging raceways in the series, with the 12 remaining men set to battle it out at the Talladega Superspeedway in Alabama on the weekend – 188 laps of pure treachery.

On the tail side of the remaining 12 are seventh-ranked Johnson, eighth-ranked McMurray, Matt Kenseth in 9th position, Keselowski in 10th, Ryan Blaney in 11th, and Ricky Stenhouse Jr in 12th.  Talladega will more than likely shuffle things up and its going to be interesting to see what the standings look like by the end of the weekend.

For Truex, Talladega makes no difference, as he’ll still advance through the play-offs irrespective of where he finishes thanks to the victory at Charlotte.  Referring to Talladega, Truex was quoted as saying that it was a great relief to be headed to the treacherous track without too many fears of something breaking down or things going horribly wrong and that he was looking forward to it for the first time in a long time, a decided perk of a no-pressure race.

It’s not only the men who benefit from the win, but the manufacturers too.  Truex has bumped Toyota even further into the lead with the manufacturer now officially at a 4 for 4.  Ford, however, is struggling on the other side of the spectrum, seemingly unable to move on out of the racing blocks this year.

Two races remain before the 12 men are cut down to 8 – the October 15th race at Talladega and the October 22nd race in Kansas.    Talladega is bound to level the playing field in unexpected ways, being infamous for being a place of wild finishes and even wilder crashes.  Some drivers believe that Talladega was build on an ancient Indian burial ground, accounting for what is known as the

Talladega jinx – the only “logical” explanation for some of the strange things that have taken place at the racecourse over the years.