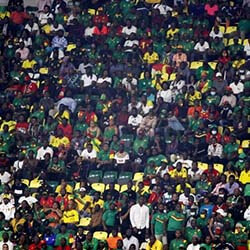 What was supposed to have been a great day supporting their favourite team has turned into a day of tragedy for many who attended Cameroon’s Africa Cup of Nations match against Comoros.

Dozens have been injured and at least six supporters are dead after a crush took place outside Olembe Stadium in Cameroon capital Yaoundé.

Several victims injured in the incident were admitted to Yaoundé’s Messassi hospital shortly after. The crush occurred as supporters crowded together in an attempt to gain access to the round-of-16 match via the stadium’s southern-facing entrance. While many of the circumstances have not yet been clarified, a local official has confirmed the number of fans understood to be dead.

But according to Cameroon governor Naseri Paul Biya, the number of deaths is expected to rise even further. Biya said he had been in contact with hospital workers who claim to be treating at least 40 injured parties. Many of those injured are suffering from life-threatening injuries, confirmed a local nurse, Olinga Prudence.

A statement released on Monday by the Confederation of African Football confirmed that an incident had taken place but that further information is required. An investigation is apparently now underway.

According to a source with supposed knowledge of the layout of the grounds, given the number of fans in attendance, the number of available entrances to the stadium may have been too few.

Cameroon won the match 2-1. They will next host Gambia in Saturday’s quarter-final in Donuala.