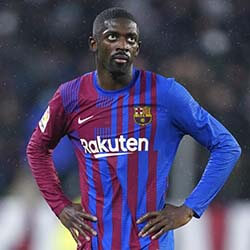 Barcelona forward Ousmane Dembele has insisted by way of a strongly worded statement that he’s not about to let Barcelona “blackmail” him into leaving the club. He says his contract negotiations with Barcelona remains ongoing.

His comments came after was dropped from the squad and ordered to leave the club.

Dembele furthermore said he would not permit anybody to speak for him but his agent, whom he said he trusted unconditionally. He said he remained fully committed to the team, and would not allow anybody to claim otherwise. This had been in stark contrast with precisely the accusation made by Barca Director of Football, Mateu Alemany.

Dembele’s exclusion came when he was left out of the squad that faced Athletic Club on Thursday. A statement was released shortly after in which Alemany confirmed that Dembele no longer wanted to play according to the provisions of his current deal. As for Barcelona, it intended on moving Dembele out before the end of the transfer window, confirmed the director.

Right now, Dembele has six months remaining on his contract. Since he failed to even try to reach a new deal and agreement, the club said it had concluded that the player had not intention of continuing his journey with Barcelona. Should he fail to take his leave, he faces spending the next six months on the sidelines.

It’s no secret that Barcelona will need to rid itself of the liability of Dembele’s salary if the club is going to acquire new players.