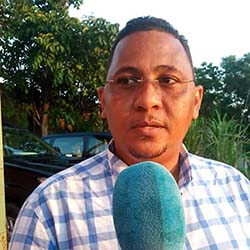 Serge Mombo, who is the president of Gabon’s football league, the La Ligue de l’Estuaire, is being accused of having demanded sexual favours from young players in return for a spot on national teams.

Mombo is one of Gabon’s highest ranking football officials. He was re-elected president of the league in June last year, and will also soon serve as the kit man for the country’s senior men’s team at the African Cup of Nations, which will be hosted by Cameroon. He is denying all allegations of sexual abuse while claiming his accusers are lying in a bid to tarnish his image.

According to a statement provided by one of Mombo’s alleged victims, the victim suffered sexual abuse at the hands of both Mombo and Eyi during a 2014 training camp in Libreville. The victim said none of the players vying for a spot on the team at the time understood why Mombo was regarded as being all-powerful. He added that Mumbo had promised him a career as part of Gabon’s senior national team in return for “giving him what he wanted”.

The victim also told of how he got booted from playing on the national team once he refused to continue with the sexual favours performed for the two men.

Mombo responded to the accusations by saying that he now plans on doing his own “investigation”.