Amber Hearn Has Slipped Into Retirement 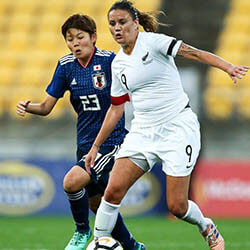 She may be the highest international scorer in the history of Football in New Zealand, but Amber Hearn has reached her limit and won’t be adding any more goals to her incredible total. The striker for the national women’s team has quietly retired, leaving all forms of the game she’s been playing for 20 years behind.

Hearn scored 54 goals in 125 international games and is the only Kiwi to have broken the half-century mark, male or female. After debuting in 2004 she went on to represent New Zealand with the Football Ferns for the next 14 years, taking part in two FIFA World Cups and three campaigns for the Olympics Games.

Her last appearance for the Ferns was in June 2018, in a game in Wellington against Nadeshiko Japan which she also captained. She failed to feature in last year’s FIFA Women’s World Cup because of a long-term injury, a factor which no doubt played a huge role in her decision to step away from the pitch.

Hearn returned home to Auckland in 2019 and said that she’s been thinking about her retirement for a long time now, admitting that it’s been a very difficult decision. She says that being out of the game because of her injuries gave her a taste of freedom and that she really enjoyed being around her family for that time. She plans to focus on her extended family, her niece having recently given birth to two sons, and her own child, Tyrone.