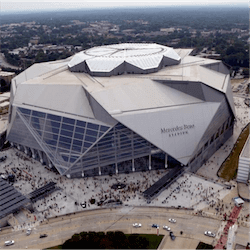 The Celebration Bowl in Atlanta offers Kiwi gridiron fans online punting options on some first-rate college football. Inaugurated in 2015, the Air Force Reserve Celebration Bowl is the post-season bowl game between the champions in the Mid-Eastern and South-Western Athletic Conferences of the NCAA Division I.

The game will also introduce many fans around the world to Atlanta’s extraordinary new multipurpose arena. In August, the breath-taking Mercedes-Benz Stadium, at an estimated cost of $1.6-billion, replaced the now-imploded Georgia Dome, itself barely 25 years old.

Brilliant Blend of Technology and Architecture

The new stadium became an instant Atlanta landmark, thanks to its striking shape: the overall effect is ‘origami spaceship’. A magnificent glass curtain wall clads one end of the building, so spectators in the stands enjoy a spectacular view of the Atlanta skyline, night or day.

Technology contributes to the never-miss-a-moment feel of the stadium. The world’s largest halo screen runs around the upper tier of the entire arena, so fans can catch actions replays, close-ups on crucial decisions, scores and game statistics anytime, from any seat in the house.

There are private suites and several bars dotted through the complex, including the 100 Yard Bar that runs the entire length of the stadium, complete with field yardage marks on the floor.

The most impressive feature of the new stadium is its unique retractable roof; also the feature of the design that created technical glitches that delayed the opening. An eight-panel iris designed to open and close like a flower, it was reportedly inspired by the oculus at the centre of the dome of the ancient Pantheon in Rome.

Fine-tuning of the roof’s retracting mechanism was postponed so that contractors could get the stadium ready to host this NFL season in time, and the roof will now remain closed for the rest of 2017, while final glitches are ironed out. By next year, however, stadium management should be able to open or close it at will, according to the weather.