England Have – Finally – Made It To The Euro Final 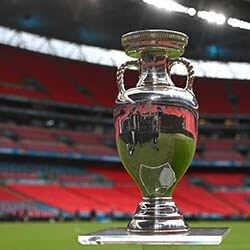 English football fans and media alike have exploded with excitement as the team celebrates making it to the Euro 2020 final. This comes after they beat Denmark in the semi-finals at Wembley stadium. All of this comes 55 years since their last European Championship final.

With a 50 percent chance of winning the final, the world of football has come to life to express its excitement. Captain Harry Kane scored the winning goal in extra time and has become an English hero. What makes the victory all the more newsworthy, is that it came off of a blocked attempt and rebounded into the net to secure the win. Denmark keeper Kasper Schmeichel cannot be too impressed by this. This goal continues to make headlines as match officials had even taken t reviewing the game after it was alleged that a laser had been shone into the goalkeeper’s eyes.

England had battled to assert its dominance during the game having missed several goals, but lady luck was on their side as a deflected goal made its way to the back of the net. The crowd of approximately 68,000 fans lost their minds in the stadium – which happened to be the same spot where Moore lead the English team to the finals.

On Monday, it will be the first time since 1966 that the English team has competed in a World Cup or Euro’s final and was as a result of Bobby Moore’s impeccable leadership style. England will face off against Italy with the hopes of bringing the trophy home.