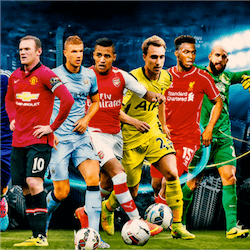 Saturday’s first match in Week 8 of the 2017-18 English Premier League could be the most important game of the weekend. Liverpool are at home to Manchester United, and Man U are currently second on the ladder. They’re tied on 19 points with Manchester City, as both teams have taken six wins from seven games, but City are ahead on goal difference, by one goal. Man U will want to turn that around on Saturday; with City also likely to win against Stoke, the Red Devils will need a big score.

Liverpool, currently seventh on the ladder with 12 points, in contrast need a home win to boost them up the rankings. Both sides have been hit by injury. Man U will be without the services of star midfielder Marouane Fellaini, who has issues with knee ligaments, while the Reds are missing ace striker Sadio Mane due to hamstring troubles.

Both teams are also neck-and-neck in the betting, at around $1.80, so Kiwi punters will have to go with their gut.

Tottenham Hotspur, Chelsea and Arsenal are currently third, fourth and fifth on the ladder respectively, and all three are odds-on for their matches this Saturday. Spurs are at home to Bournemouth, at $0.22 vs $16.00. Defending champions Chelsea, playing away, are offered at $0.42 against Crystal Palace at $9.00, and Watford are at $4.50 hosting the Gunners at $0.68.

On Sunday, Everton are $1.50 favourites playing away against Brighton and Hove Albion, offered at $2.42. Southampton are at home to Newcastle, with the home team offered at $0.90 and the visitors at $3.90.

Leicester City are a long way from the heights they reached two years ago; they’re currently 17th on the ladder after just one win and two draws from seven games. Nevertheless, they’re the favourites at home to West Bromwich Albion on Monday, at $1.11 vs $3.35.