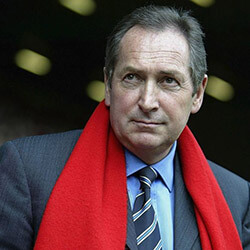 Former Liverpool and France manager Gérard Houllier has died. He was 73.

Houllier coached the French national football team in 1992 and 1993. He also led Paris Saint-Germain as well as Lyon to French league titles. During his 6 years in charge of Liverpool, the celebrated coach/manager won several of the biggest awards in world football – including the UEFA Cup, FA Cup, and the League Cup – with last-mentioned won twice.

He started experiencing serious health issues while at the helm of English side Aston Villa in 2011. Following a dissection suffered to the descending aorta, he eventually decided to step down from managing Aston Villa during that same year.

Tributes have been streaming in on Twitter since the announcement of Houllier’s passing. A player Houllier was often quoted as saying he was “most proud of” during his stint at Liverpool, Jamie Carragher, was one of the players paying tribute to the legend on social media this week. Carragher earlier this week tweeted about his devastation at the news about Houllier’s death, saying he had only a month ago been in contact with his “Boss” about him (Houllier) visiting Liverpool. Houllier not only changed him as player, wrote Carragher, but also as a person, and was dearly loved by all who new him.

Houllier’s health issues dated further back even than his time at Aston Villa. After becoming joint manager of Liverpool alongside Roy Evans in 1998, the Frenchman took sole charge of Liverpool only three months later before leading the franchise to a treble victory in 2000-01. Following heart surgery in 2001, he would go on to return to Liverpool after but a brief absence before spending another three years with the club.