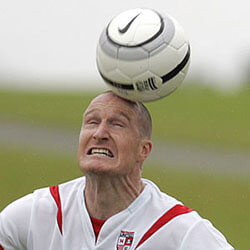 Danny Hay, the new coach for the All Whites Football squad, has asked one of the team’s heroes to join his staff. Rory Fallon, the man responsible for scoring the goal that saw the team being sent to the World Cup in 2010, will be getting involved as assistant coach ahead of next month’s friendly games against the Republic of Ireland’s Na Buachaillí i nglas, The Boys in Green, and Lithuania’s Baltic Giants. These games will end an extended break of 525 days between matches for the team.

It is believed that Hay sees Fallon as someone with a good grasp of what it means to be part of the team and expects him to drive the formation of a culture around it. Fallon was capped by New Zealand 24 times in total and scored 6 goals. Hay took up his new position with the All Whites at the end of August, after Fritz Schmid departed at the end of June. Reports indicate that he will be naming his team for the upcoming games in early November.

Fallon’s last involvement with the NZ Football team was when he was handed the shock callup for the World Cup qualifying playoff versus Peru in November 2018 by Anthony Hudson, the manager for the All Whites from 2014 to 2018. Hudson at that time stated that Fallon added a lot to the environment of the team off-field thanks to the important part he played in the campaign for the tournament even though he was approaching the end of his days as a player.