Iran Holds Russia To A 1 All Draw

Russia And Iran Square Off In Draw 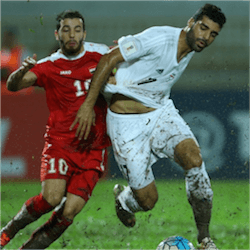 A draw is generally considered to be better than a loss, except when you’re a doubtful candidate to be challenging anyone at World Cup level standards or when your name is Stanislav Cherchesov.  This makes for a 2 out of 2 for Russia after having drawn 1-1 with Iran on Tuesday in an international soccer friendly.

The draw pushes Russian coach Stanislav Cherchesov’s total draw tally up to 14 matches since taking over at the helm in August of 2016.  Russia had managed to work things up to a single chance only just before half-time but squandered the opportunity by going at the kick too wide.

Russia tried as they might to apply the pressure but a lack of following through saw the effort ending in a very bad job indeed.  On the other hand, had the Russians not indulged in a bit of risky play, they would most probably have walked away empty handed altogether.

Iran, unbeaten in seven games, managed to qualify for the World Cup during last month.  They went into the match against the 2018 World Cup hosts in true humble Iran-form on Tuesday, with team coach Carlos Queiroz notably careful not to hype it up too much.  He spoke to the press ahead of the friendly, saying that it was Iran’s intention to learn all that they could from Russia and that he (Queiroz) believed that the Russian side that they would be up against was not the same side that failed to perform at the Confederations Cup.

You can’t exactly have a World Cup and not invite the host nation.  This seems to be Russia’s current situation: presence by formality instead of merit.  Then again, Iran, despite their 10 games unbeaten qualifying romp, has managed to stay in the running by means of marginally narrow wins and draws involving no goals.

It’s not been a journey that’s been anything close to spectacular but at least it hasn’t been a losing battle either.

The star story to trump all others has definitely been that of war-torn Syria and their hope to qualify for the 2018 Soccer World Cup.  It has been their sheer unbreakable optimism and drive that has brought them this far.  Ironically, it was Iran that almost cost them the glimmer of World Cup hope during the final group match of last month.  Had it not been for an injury time equaliser by Omar Al Somah, things may have turned out very differently altogether.