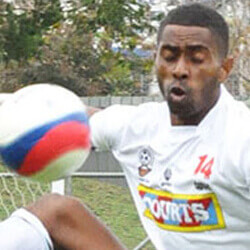 Samuela Drudru, a forward for Laukota, has received a suspension from seven upcoming matches due to racial slur, in this case, Drudru referring to match officials as, “white people.”

The footballer was send off the field by Campbell-Kirk Waugh, a New Zealand referee, during an OFC Champions League semi final against Marist FC.

The 29 year old Drudru admitted to reporters that he had used the team after he was given a second yellow card for a tackle midway through the second half of the game.

The ban that has the player has received includes suspension from seven matches on all levels, a ban from entering the confines of the stadium, as well as a fine of $NZ7500.

Kamal Swamy, coach for Lautoka, told reporters that he had only recently found out about the ban, just two days before they were to play Team Wellington in the first leg of a grand final.

“The last minute we came to know Samuela Drudru is not playing, about his sanction, and then I think New Zealand immigration did not allow Zibraaz and Peni Finau to come to New Zealand, where we lost three top players,” Swamy stated. “So it’s just part of football and then we need to prepare better.”

The team is looking to appeal the ban over the course of the next few weeks in an attempt to get one of their best players back as the finals take place. It’s doubtful whether the ban will be lifted.