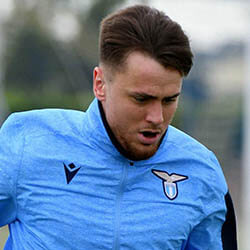 Spanish-born Italy pro-footballer and Lazio defender Patric has been slapped with a four-game ban for biting an opponent. The player will also have to part with a sturdy $17,250 penalty fine. Patric, during a heated argument with Lecce defender Giulio Donati during Lecce’s 2-1 Serie A victory over Lazio on Tuesday, seemed only to have waited for stoppage before biting into his rival’s left arm.

The 27-year-old appeared obviously outraged at the prospect of a title loss to Lecce, and along with several other players, could be constantly seen getting verbal with the opposing team. Patric however took his disappointment a step too far out of line by getting physical with his rival in the worst possible way.

The league has in the meantime released its disciplinary notes regarding the incident involving the bite and said that even though the bite had not caused any injury to Giulio Donati, a bite was a bite and Patric would be made to face the consequences of his actions. Patric has in the meantime issued a formal apology to Donati, explaining that he had not been in a “lucid” state of mind at the time of the argument. Donati has reportedly accepted Patric’s apology, saying that he understood the pressure of high-tension play, and that since Patric did end up realising his “mistake” and apologising, he won’t be harbouring any ill feelings toward his rival.

Patric’s punishment is nothing compared to that imposed on Uruguay international player Luis Suarez during after his biting stint at the 2014 World Cup. Suarez, after having sunk his fangs into Giorgio Chiellini, got banned from all forms of football for all of 4 months and 9 international matches.