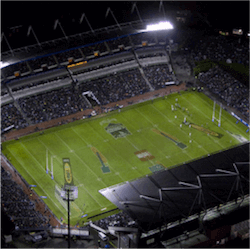 Home Of The Warriors To Get New Title Partner

Mt Smart Stadium, the famed home of the Warriors, could be in a for a new name soon. Mt Smart has been sans a sponsorship naming partner since 2006, which was the last year that it was known as the Ericsson Stadium. The stadium has undergone a number of major infrastructural improvements over the last year and a half, after the Warriors confirmed that they were in agreement with extending their licence at the grounds to 2028.

The stadium is also one of New Zealand’s main outdoor concert venues and is owned by Auckland Stadiums, a unit of Regional Facilities Auckland. Director Paul Nisbet confirmed that Auckland Stadiums had invested a lot of time and money into improving the infrastructure at Mt Smart and that in their opinion, the quality was now up to scratch and the time right for inviting interest for a new major naming rights title sponsor.

Nisbet did not mention specific figures, but he word on the street is that a significant revenue stream is what is hoped for in order to carry the costs of ongoing maintenance at the stadium. Experienced global naming rights broker Murray Stott estimates the price tag to be anything between $500,000 and $1m. The duration of a contract would generally be between 10 and 20 years.

Stott also said that the naming rights market had become more conservative, with the focus having shifted so dramatically away from television audiences and towards the online market. The price tag associated with naming rights very heavily relies on the expected media coverage enjoyed by a stadium or event. Media coverage ultimately comes down to television audiences for major fixtures.

Apart from being home of the Warriors, Mt Smart is also home to Athletics Auckland, the Auckland Football Federation and the Oceana Football Confederation. In addition to this, the venue played host to a number of major entertainment acts during 2017, including Adele, Bruce Springsteen and Paul McCartney. This year, Ed Sheeran and Taylor Swift have both booked out the stadium for shows scheduled for March and November, respectively.

Nisbet went on to say that there were no major re-development plans in the pipeline for Mt Smart, but that the revenue gleaned from a title sponsorship would go a long way towards keeping the structure up to standard for all who use the venue.

Some recent upgrades to Mt Smart include the installation of New Zealand’s largest permanent screen as well as a new LED lighting system.