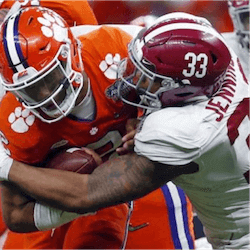 The teams of Alabama and Georgia don’t meet every football season, so when these two schools rich in tradition do meet come together it is a special occasion, even when the match is a regular season one.

So, while it may sound like just one more Southeastern Conference, or SEC, game, when the Bulldogs head into the Crimson Tide on Monday evening for the national championship, you can bet your bottom dollar that it will be an event of note.

A Rivalry that has Delivered Some Memorable Games

There have been some glorious games in the rivalry that started up back in 1895, when the teams first met one another in Columbus, in Georgia -and no doubt both are hoping that Monday night will be one more!

Julio Jones, receiver for the Atlanta Falcons who took part in a skewed win for Alabama over Georgia back in 2008, is eagerly anticipating seeing his alma mater play a game in the Mercedes Benz Stadium, his NFL home arena.

The Falcons are getting ready to play a game against the Los Angeles Rams in this Saturday’s playoffs, but the showdown on Wednesday between Alabama and Georgia is what has his attention locked.

Jones reported that, although he was pulling for Georgia as well, he simply couldn’t cheer for that team on Wednesday.

From the years 1941 to 1965, the SEC rivals were meeting almost every season. Since then, however, the meetings have reduced in regularity: the played one another four times in the 70s, twice in the 80s, and four times again in the 1990s. They have met only twice in the past ten years, and Alabama has won both of those matches.

The low point of this rivalry occured in the early 60s, when the former coach for Georgia, Wally Butts, and the coach for Alabama, Bear Bryant, each successfully sued the Saturday Evening Post magazine when it published a story alleging that Bryant and Buts had conspired together to fix the game which took place in 1962, one which the Crimson Tide won with a final score of 35 – 0.

Butt was the athletic director for Georgia at the time, and he was initially awarded a total of US$3.06 million, although he settled for US$300 000.