Yeovil Town In Round 4 Of The FA Cup 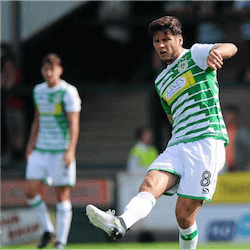 The fourth round of the FA Cup is around the corner with League Two Yeovil Town getting ready to host Manchester United.  Manchester United will face the Glovers for only the second time in four seasons, having beaten them 2-0 in round 3 back in 2015.

Manchester United needs no introduction, but who is Yeovil Town exactly?

Yeovil Town hails from the town of Yeovil in Somerset.  Population: 45,000; thus one of the smallest towns in all of England to have an EFL club.

Yeovil Town currently plays in League Two, where it has been playing since having been relegated from League One in 2015.  In the 2013-2014 season it actually looked as if Yeovil Town were going to go to town on EFL, having scored notable wins over Watford and Nottingham Forest.  It hasn’t been all on the up and up for Yeovil since then though, with the club currently battling to hold on to its EFL status, now sitting at 21 in League Two and a nail-biting 2 points above the next relegation zone.

Who Is Yeovil Town?

Yeovil Town was only promoted to Football League quality in 2003 after having spent more than a century (108 years, to be exact), as a non-league club.  Now, 15 years later, its proving to be an uphill battle to not return to its former status.

On the up side, they do hold the record for the most unlikely wins in the history of the competition.  Who can forget the 2-1 victory over Sunderland at the Huish stadium in 1949?  Now, more than 50 years later, they seem to have found their flying feet once more, having triumphed over Southend United and Bradford City and progressing through the fourth round.

Their apparent lack of consistency and failure to proceed through the ranks despite playing well at times aside, Yeovil Town has a number of top scorers up its proverbial sleeves.  The focus will most probably be on Francois Zoko when round 4 of the FA Cup gets underway.  Not to flip Sam Surridge to the curb, either.  Surridge isn’t born and bred Yeovil, but is on loan from Bournemouth, and is expected to be a key player during round 4.

Other players to keep an eye on  are Jake Gray, Jordan Green and star defender Tom James.

Former Manchester United player Otis Khan, who now plays for Yeovil Town, will not be participating after having been suspended for barging referee Kevin Johnston in the match against Chesterfield.