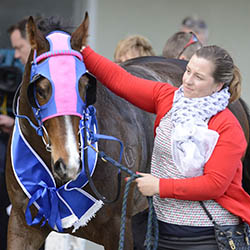 Chrissy Bambry, Central Districts trainer, has lost no time getting wins on the board at the first of the Lower North Island’s Thoroughbred Meetings after a hiatus enforced by the novel coronavirus COVID-19. Spring Tide, a new addition to the stables, turned out to be an emphatic winner in the 800-metre opening event, and Speed Call turned the Whanganui Motors HWT into a one-act affair two races later. The five-year old gelding scored by over 12 lengths in the confident hands of Ryan Elliot.

Bambry described Spring Tide as a good galloper and says she’s been able to keep him fresh by working mainly on the water treadmill. She stated that she was really pleased with this because he’s had to work at how he’s coming out of the gates and she’s seen a vast improvement. She said she’s going to stick to this schedule going forward.

Bambry said that Spring Tide is her first runner for a new customer, Cloverlea Thoroughbreds’ Wayne Ross. She said the stables are based in Victoria, but have a small team here in New Zealand and she’s the lucky one that gets to look after the animals when they’re in the country. Bambry says that she chatted to Chipperfield before Ross purchased Spring Tide who told her he went well and probably needed a wet track.