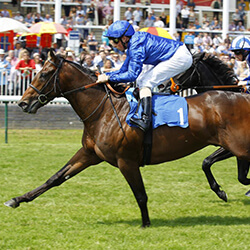 Charlie Appleby-trained Blue Point has claimed the won for the King’s Stand Stakes for a second consecutive year for the opening day of the Royal Ascot. Similar to the 2018 event, which was priced at 5-2, Blue Point finished ahead of Battaash, who has started the race as the 2-1 favourite. Blue Point was ridden by James Doyle, and has become the 12th horse in history to win the race twice.

Appleby, talking about the win told reporters that he is one of the older warriors from the yard and it has been a great effort from everyone at home. Soldier’s Call, who was at 16-1, came in third while Mabs Cross, 6-1, finished in fourth place. Earlier in the vent, Lord Glitters at 14-1, trained by David O’Meara and ridden by Daniel Tudhope, won the opening race of the tournament, the Queen Anne Stakes.

Laurens hit the front two furlongs, but faded in the group and ended the race in sixth place while Lord Glitters won narrowly beating out Beat The Bank and One Master.

The second race of the event saw 15-8 favourite Arizona, who was ridden by Yan Moore and trained by Aiden O’Brien, finish to win the Coventry Stakes, beating Threat by around half a length, while Guildsman a neck back for third place. The O’Brien and Moore pairing saw victory for the fourth race with 10-1 Circus Maximus winning by a neck at the St James Palace Stakes race.