Bonneval A Mare On The Move 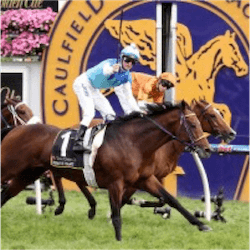 Murray Baker and Andrew Forsman have a lot to be proud of when talking Caulfield Cup, and her name is Bonneval.  Bonneval is currently hoping for a lucky number 7 after having won the Underwood Stakes on October 1st.  The stellar mare also came first in the Oaks in March as well as in the Australian Oaks during the Autumn Carnival.

Jim Cassidy has already proclaimed Bonneval the winner at the Caulfield Cup, saying that the mare was pure class and that she kept on winning, despite all odds.  He went on to proclaim that if he (Cassidy) was chasing the win, Bonneval would be his first choice.  He was also full of praise for Murray Baker, saying that Baker and Bonneval were as tough as only Kiwi’s could be.

Cassidy is one of only three jockeys to have ridden no less than 100 Group 1 winners in Australia.  He announced his retirement from professional horse racing in 2015.

Trainer Stephen Autridge has been trying to put on a happy face but it has been obviously impossible, and it’s no surprise at all with Gingernuts being effectively out of the serious running after the abandonment of the Group 1 Livamol Classic.

Gingernuts was the firm favourite for Livamol and looked forward to up his preparation game ahead of Caulfield.  The Caulfield Cup was expected to be a milestone in the horse’s career as he would be racing against Bonneval for the very first time ever.  Autridge said to the press that the Livamol situation was everything but ideal and that it placed Gingernut’s bid for the Caulfield Cup in serious jeopardy.

The Livamol Classic is the biggest Spring horse racing meet in New Zealand, but race-day had to be abandoned mid-way through as a result of torrential rains causing the track to become unsafe for racing.  The slippery conditions became all the more apparent when Mark du Plessis’ Bostonian suffered a bad slip as a result of the sleek conditions.