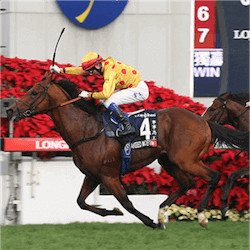 It’s Hong Kong’s richest Group 1 race by far and one that is notorious for attracting only the cream of the horseracing crop.  It’s of course, the Hong Kong Cup.  The $3.2 million prize purse obviously has a lot to do with the fact, but it runs much deeper than this.  The race has a deep-rooted tradition in Hong Kong, one that announces class and an almost other-worldly quality.

The Hong Kong Cup is run over a distance of 2,000 metres and a good gate start is crucial for any horse wanting to secure a decent position.  This year, the event drew 12 entrants, and locally based John Moore trained Werther stands out as a favourite to win the 2017 Hong Kong Cup.

The stars have indeed aligned for Werther.  Werther drew a perfect barrier 3 start for Sunday’s race.  The Hong Kong Cup includes a very short run towards the first turn.  This makes it an incredibly tricky race, with not much room to accelerate before having to turn that pesky corner.  Werther may now be in the perfect position to do so quite effortlessly.

A Product From New Zealand

Werther was born and bred in New Zealand and the 6 year old approaches the end of the year having become Hong Kong’s leading horse in the 1 ¼ as well as 1 ½ mile divisions.

According to Moore, Werther has not a care in the world going into this year’s Hong Kong Cup, and that the 6 year old is his (Moore’s) best hope for the race.  Despite Werther being the undisputed race favourite, the horse has shown himself worthy of beating the odds before.  Werther got off to a very late start to the 2016/2017 racing season, but nevertheless now finishes the season ahead of the pack in so many ways.

The locals have always stood out at the Hong Kong Cup but this does not mean that the foreigners should be completely ignored.  In fact, two of the horses most likely to pose stiff competition to the locals this year are Neorealism (Japan) and Poet’s Word (Britain).

Neither of these two foreign competitors are to be taken lightly as possible victors for this year’s Hong Kong Cup.