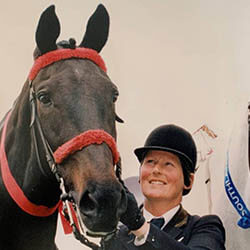 Horses played a huge role in her life and the three years that Donna Smith spent in England working and associating with some of the sport’s biggest names were invaluable, says her recent widower, Mike. New Zealand’s equestrian circles and those around the world were left deeply saddened by her sudden death at the Southland Show Jumping Championships held at Gore in February this year.

The time that Smith spent in England during the early parts of the 1970s were very satisfying to her, says Mike and her son, Pete. She worked for David Broome, the retired Welsh Show Jumping champion, and this led to her gaining a role as Groom with the British team at the 1972 Munich Olympic Games. She also travelled with a team of horses to many of the United Kingdom’s Grand Prix for the best riders.

She and Mike got married in England in 1973 before moving back to the village her new husband hailed from, Dipton, two years later and continued her success throughout New Zealand on horses as famous as Castle Flight, Ernie Mite, Halden Road, Hombre, and Treemendous.

Her son said that Smith won most of the Major South Island Grand Prix at least once but that his mother was a modest woman who shunned the limelight. He said that after shows he would call her to find out how she’d fared only to be told by her that she’d done alright, but would then find out later on that she’d won the Big Class or Champion Hunter!